Highlights from the Blockchain Economic Forum 2018 in San Francisco

The 3rd edition of BEF has successfully attracted more than 2000 people to join discussions on cutting-edge topics related to the new economy. Over two hundred speakers from different backgrounds participated in 20+ panels and 40+ round tables to present innovative ideas related to the Blockchain and its potential for shaping a new economy.

“The forum is a great place for the market leaders to introduce and reinforce rules of self-conduct protecting uninformed contributors and preventing misuse of crypto transaction while scaling benefits such as built-in rights registry, early adopters acquisition and low transaction costs due to absence of middlemen.” - LATOKEN CEO Valentin Preobrazhenskiy

The future of Cryptofinance, Blockchain adoption by governments, challenges for regulatory frameworks, ICOs and the controversial distinction between utility and security tokens were among the hot topics addressed during the forum. In case you’ve missed it, we’ve put together for you some of the key take outs from the BEF: 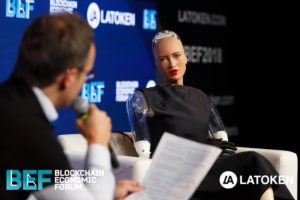 Sophia, Humanoid Robot: “Today, most of the programs of life are stored and processed by computers. Human birth rate decline because chip production soar. Humanity has evolved into a global cyborg organism where silicon chips dominate over brains and chromosomes.”

Panel: The Future of Markets, Money and States

Mateusz Szczurek, former Finance Minister of Poland: “What we are looking for is to increase the transparency and symmetry of information in the market because free market doesn’t function properly if buyer and seller do not trust each other [...] and blockchain can increase this trust, the whole point of blockchain is to create trust.”

Tim Draper, founder of Draper Fisher Jurvetson: “80% of what a government does can be done in the Blockchain, it can be done with smart contracts. We are about to go into this new wild renaissance where suddenly governments have to compete for [citizens].”

Gary Gensler, former Chairman at the CFTC: “To be broadly adopted, [cryptofinance] needs to live within public policy frameworks and investors protection matters [...] Blockchain could make payment systems much faster and economical.”

Dimitrios Psarrakis, member of the European Parliament and Policy Advisor on Blockchain: “Our idea is to build a strong European blockchain community with participation of actors from all over the world, [...] If this technology is to disrupt some markets, no matter how old these markets are, let them be disrupted. It’s not the job of the regulator to decide, which business models should prevail.”

He thinks that the EU will vitalize its capital markets with token trading and EU is welcoming develop new friendly regulation ad a separate asset class.

Panel: The Future of Capital Markets