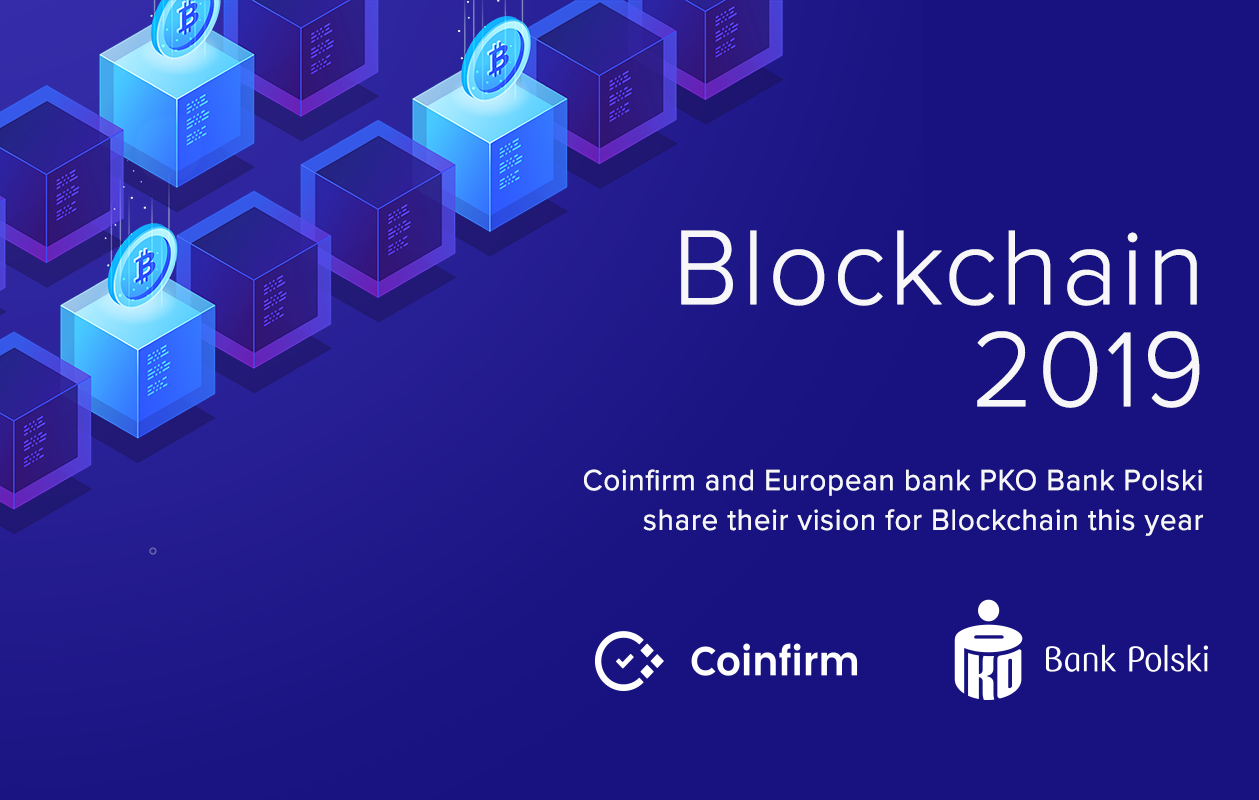 As two industry leaders in their field relating to the technology, PKO Bank Polski and Coinfirm are bringing you some insights into 2019 for blockchain technology.

BLOCKCHAIN TECHNOLOGY FROM THE BANKING PERSPECTIVE

One of the most popular applications of the blockchain technology and its features has been token creation and the subsequent ICO (so-called Initial Coin Offerings) 2017 clearly proved that there is a global investment demand for such solutions and methods. However, the ICO not only a potentially revolutionary technological solution in finance and fundraising but also raised many concerns, especially around securities laws and regulatory compliance. With new regulations coming down across the world and the SEC in the United States beginning to go after select ICO projects, the ICO future path is uncertain and it’s a wait and watch situation.

THE EMERGENCE OF THE SECURITY TOKEN OFFERINGS (STO)

Security Token Offering STOs are going to better fit within the current regulatory framework and understanding of formally releasing securities to investors, but now in tokenized form. Following a similar technical model to ICOs, STOs create tokens which represent a legal stake in the company or the right to profit from a given venture (so-called STO - Security Token
Offering). From the technology point of view, conducting e-voting or paying out dividends is not a problem, it is even more transparent and accessible to shareholders. The problem is the legal definition of the token and the conservative attitude of regulators who do not want to make a mistake by giving a green light to the action in the matter not known to them. At the moment jurisdictions such as Malta, Gibraltar and Switzerland seem to lead in the STO friendly approach. Birthing out of the STO market will be blockchain assets and tokenized securities
that the regulated system, large traditional institutions such as banks, and the market as a whole will be able to formally interact with. This will take the traditional adoption of blockchain assets and technology to a new scale.

In our opinion, such funding methods based on blockchain technology and a solid legislative framework may in the coming years significantly change not only the approach to financing projects at the idea stage, but also impact traditional financial markets. It is worth bearing in mind that the token may also represent already existing shares of popular companies such as Facebook, Google, Berkshire Hathway etc. Thanks to the transfer of shareholders' rights to an independent digital medium, stock trading can be carried out continuously, and thanks to the divisibility of tokens, portfolio diversification will become much simpler and effective.

THE GROWING POPULARITY OF STABLECOINS

Another new application of blockchain technology that will have its coming out party in 2019 is the Stablecoin. A new class of cryptocurrency, a Stablecoin provides price stability through being backed by or pegged to reserve assets such as the US dollar, or by being algorithmically programmed to stay within a range of price stability. Providing a price stability and a peg to a reserve asset will help address some of the largest roadblocks from the mass usage of cryptocurrencies and can serve as an onboarding ramp for not just financial institutions and companies but also the traditional and mass consumer and investor. The largest bank in Japan MUFG has created its own Stablecoin pegged to the yen. Called MUFG Coin, it is already actively testing it in the market at convenience stores, showing that not only is the technology and cryptocurrency for real, but that the largest and most traditional financial institutions are finding and acting on its benefits and principles.

Most recently JP Morgan Chase with their JPM Coin. Although JP Morgan Chase doesn’t classify it as a Stablecoin, and there are debates whether it is technically even a cryptocurrency, each JPM Coin is redeemable for a US dollar which very much technically follows a Stablecoin model. We’ll see how the ecosystem around the JPM Coin develops but it shows another step in the direction of the enterprise adoption of blockchain by the largest traditional financial institutions and companies in the world, leading us to the next section.

YEAR OF THE ENTERPRISE

This past year we began seeing the first true implementations and adoptions of blockchain within major and more traditional enterprises. Together PKO Bank Polski and Coinfirm are responsible for potentially the largest blockchain implementation in banking to date. 2019 will mark the year major enterprises begin to seriously adopt, integrate or create their own blockchain based ecosystems. Companies like Facebook for example already have not created their own divisions dedicated to exploring how to use and integrate cryptocurrencies and
blockchain technology into their ecosystems but are actively building these solutions. As of right now whether it’s IBM, Microsoft, or Oracle, the largest technology company and enterprise solution focused companies in the world are heavily investing into blockchain technology and its applications.

Coinfirm is a recognized leader in their field, ranked among the most influential blockchain and regtech companies and serves as a foundation for the safe adoption and use of blockchain. The Coinfirm AML/CTF Platform uses proprietary algorithms and big data analysis to provide structured actionable data that increases efficiency, reduces costs and streamlines compliance to near automation. The blockchain agnostic platform benefits companies operating around blockchain as well as major financial institutions, asset management companies and BI companies.