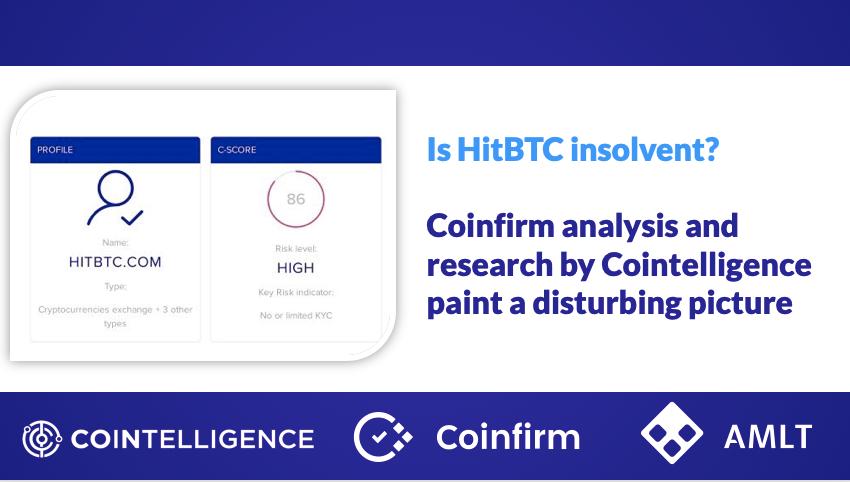 Is HitBTC insolvent? Coinfirm analysis and research by Cointelligence paint a disturbing picture

Crypto exchange HitBTC only has around $3m in BTC and ETH across its wallets according to analysis by Crypto regtech firm Coinfirm.

Crypto exchange HitBTC only has around $3m in BTC and ETH across its wallets according to analysis by Crypto regtech firm Coinfirm.

Following the partnership between Coinfirm, AMLT Token Network and Cointelligence, one of the key focuses we have been working on is providing insight into the amount of actual reserves that the major crypto exchanges are holding in their hot and cold wallet addresses.

We will cover 4 red flags:

1. Proof of reserves by Coinfirm

The first list of proof of reserves provided by Coinfirm and the AMLT Token Network on the 8th of April showed that HitBTC is holding 245.20 BTC in their hot and cold wallets, clusters at block height 570159 clustered at block height 568918.

That was the first trigger for Cointelligence and Coinfirm to look deeper into HitBTC’s activities.

A second snapshot was done on the 30th of April, showing BTC clusters at block height #573150, HitBTC hot and cold wallets showing 449.65 BTC.

Let us compare this to Bittrex, Kraken and Poloniex: 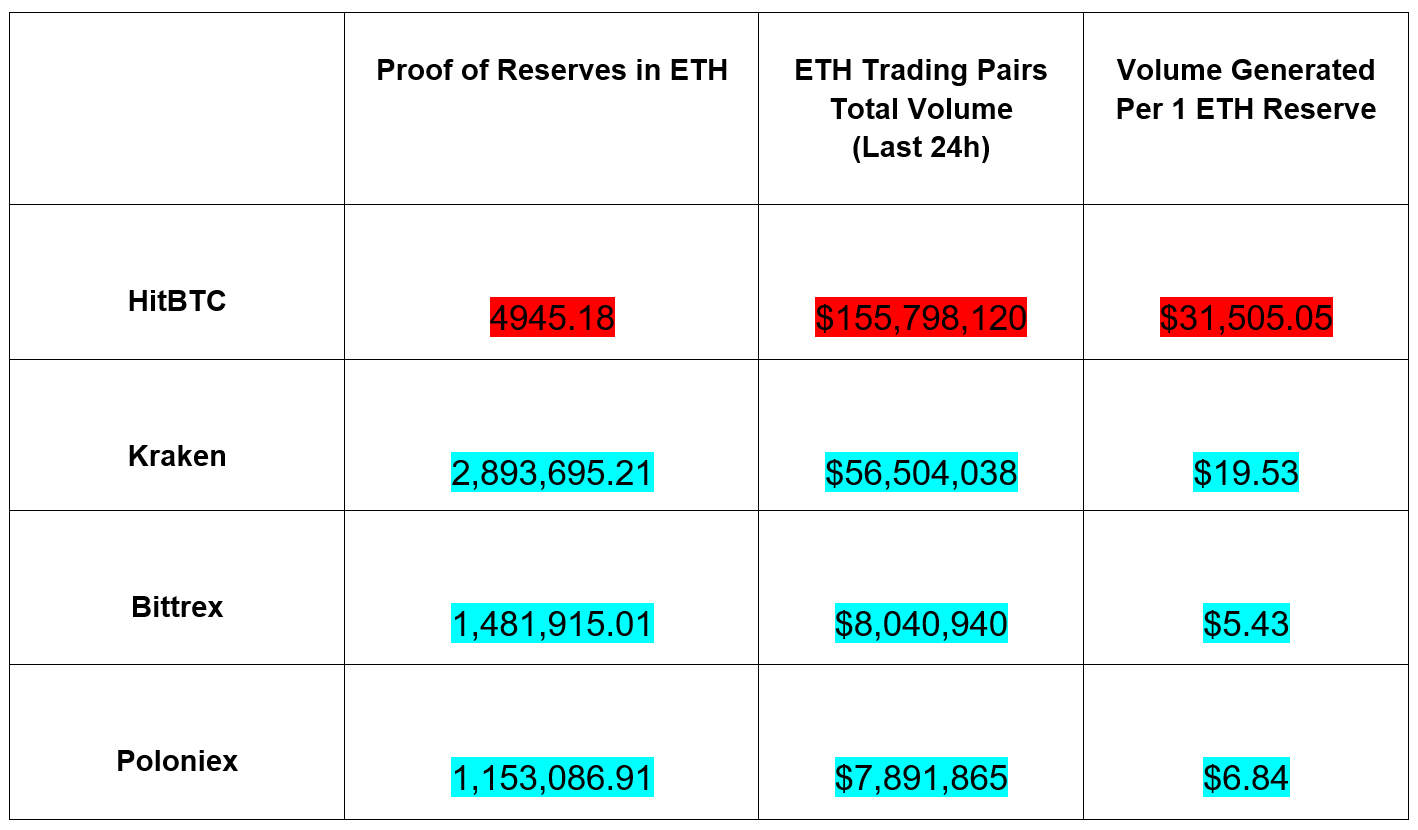 Disclaimer: All the values are based on the addresses known to Coinfirm at the time of writing this report. If you know any additional hot or cold wallet of HitBTC please report them to the AMLT Token Network here and you can even be rewarded for it. 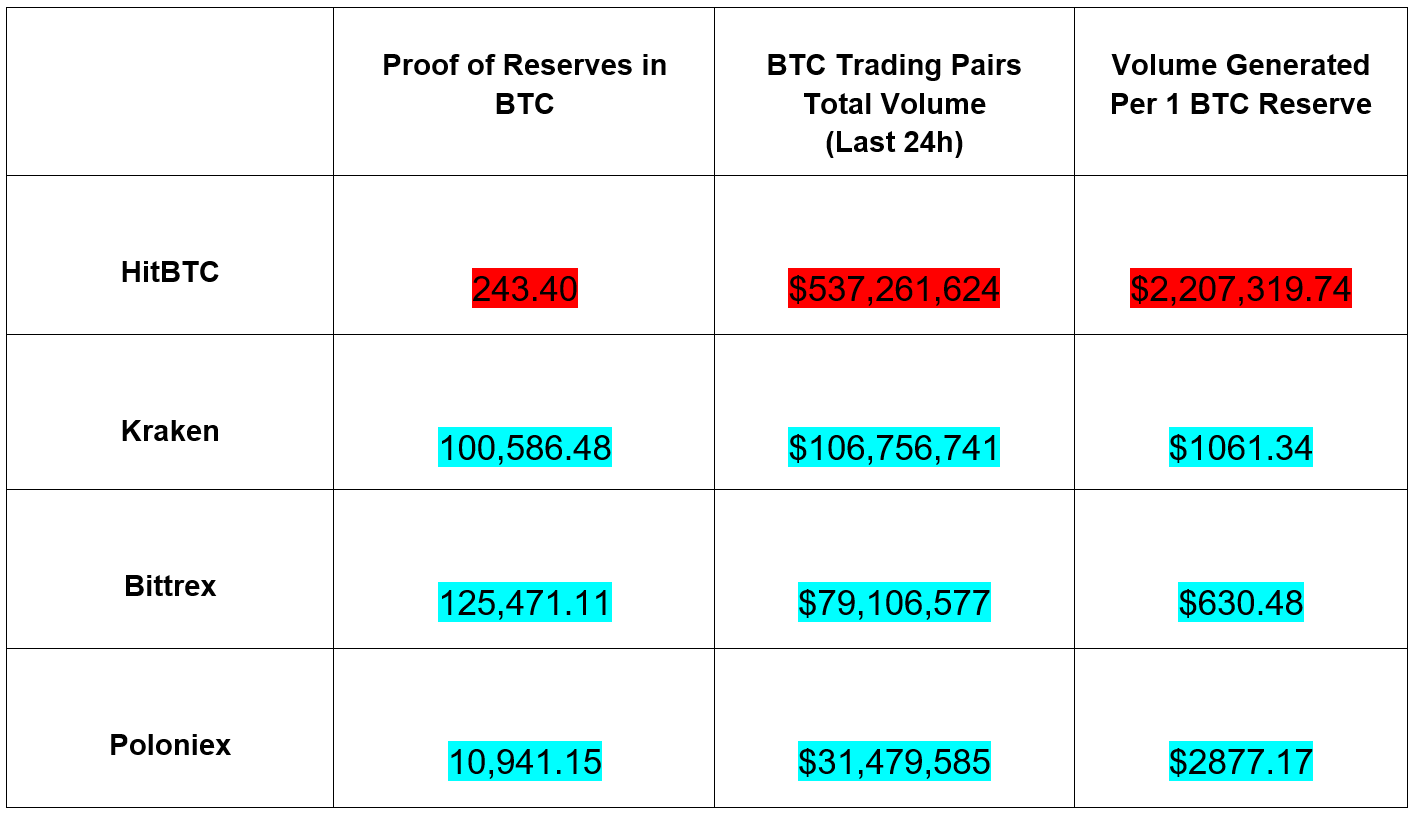 Disclaimer: All the values are based on the addresses known to Coinfirm at the time of writing this report. If you know any additional hot or cold wallet of HitBTC please report them to the AMLT Token Network here and you can even be rewarded for it.

HitBTC was and still is an exchange which allows its users to trade crypto-to-crypto, along with the option to buy cryptocurrency using a credit card through 3rd party providers.

HitBTC didn’t force KYC on its users until it became convenient to them, following the article by Filip Zaric Moye on the 23.04.2018, “Frozen funds, excuses and confusing messages – there is a growing stack of evidence to suggest that HitBTC, the cryptocurrency exchange, is scamming some users.”

“Ironically, they use the pretense of a best practice known as Know Your Customer (KYC) as a masquerade to seemingly swindle funds on an indefinite basis, refusing requests for a refund. Name, address, citizenship and photo ID are all ways in which KYC can be implemented – it seems that HitBTC’s no ID policy was designed to get customers on board before the u-turn gave them a convenient excuse to freeze accounts.”

Following the recent Tweet from CZ on the 14th of May, related to Nomics’ Exchange index, presenting HitBTC as a top rated exchange:

On Yavin, CEO & Founder of Cointelligence reached out again to HitBTC. Cointelligence has made it its top priority to fight scams and bad actors in the crypto space since its founding, and is focused on promoting a more transparent way of doing business.
The tweet attracted a user who has his funds locked in HitBTC following its new KYC/AML policy. The user, @woailianfang1 claims that he provided all the details to HitBTC, yet they are not releasing his funds. 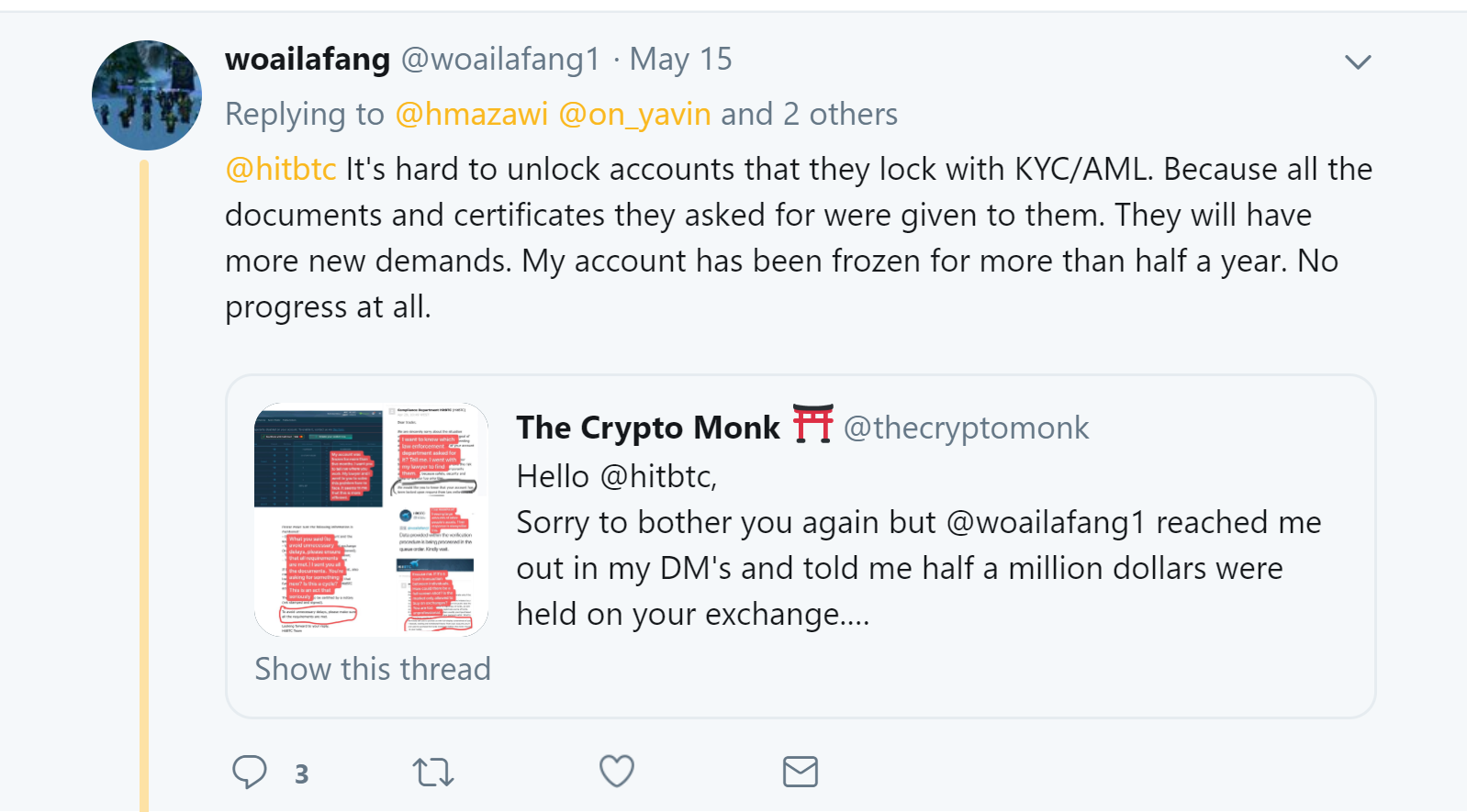 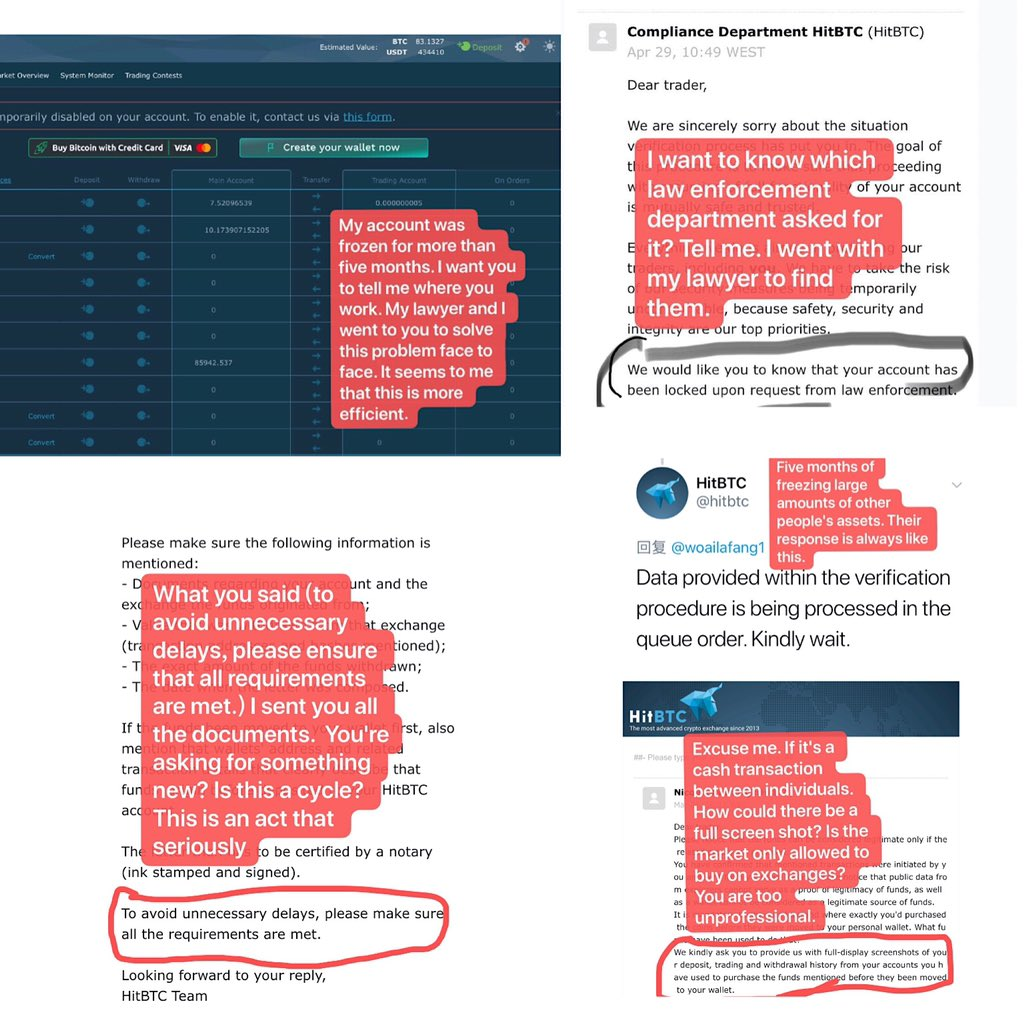 Let’s go with logic: HitBTC has higher fees than any exchange on the market, why would any exchange offer such fees? Anyone? Anybody?

In some cases HitBTC has 10-40X higher fees than the benchmark.

When we conducted our HitBTC exchange rating, we gave them a risk score of 7 and a team score of 0, as there is no public information available about their team.

On has tried several times to get information about their team on Twitter: 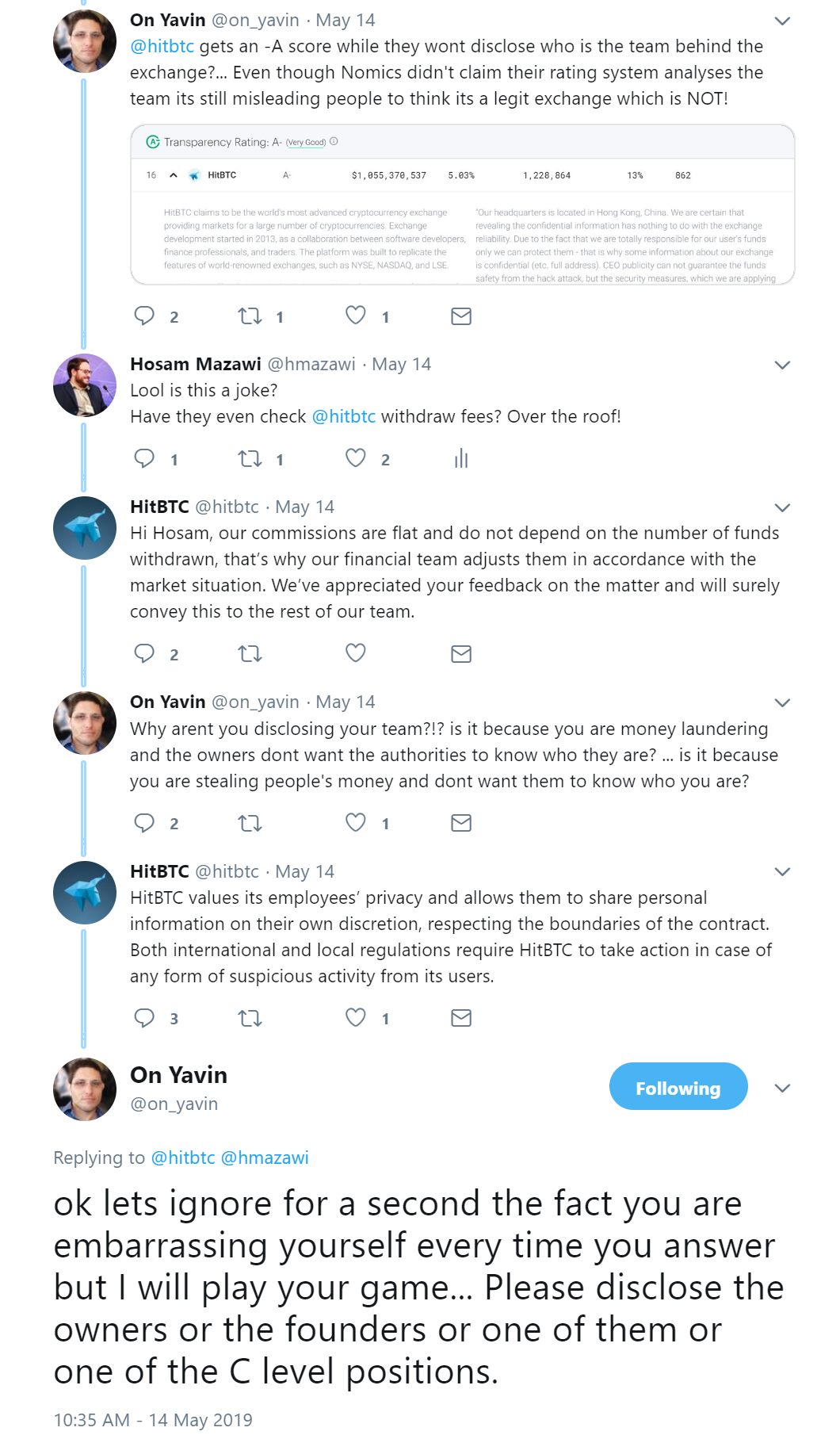 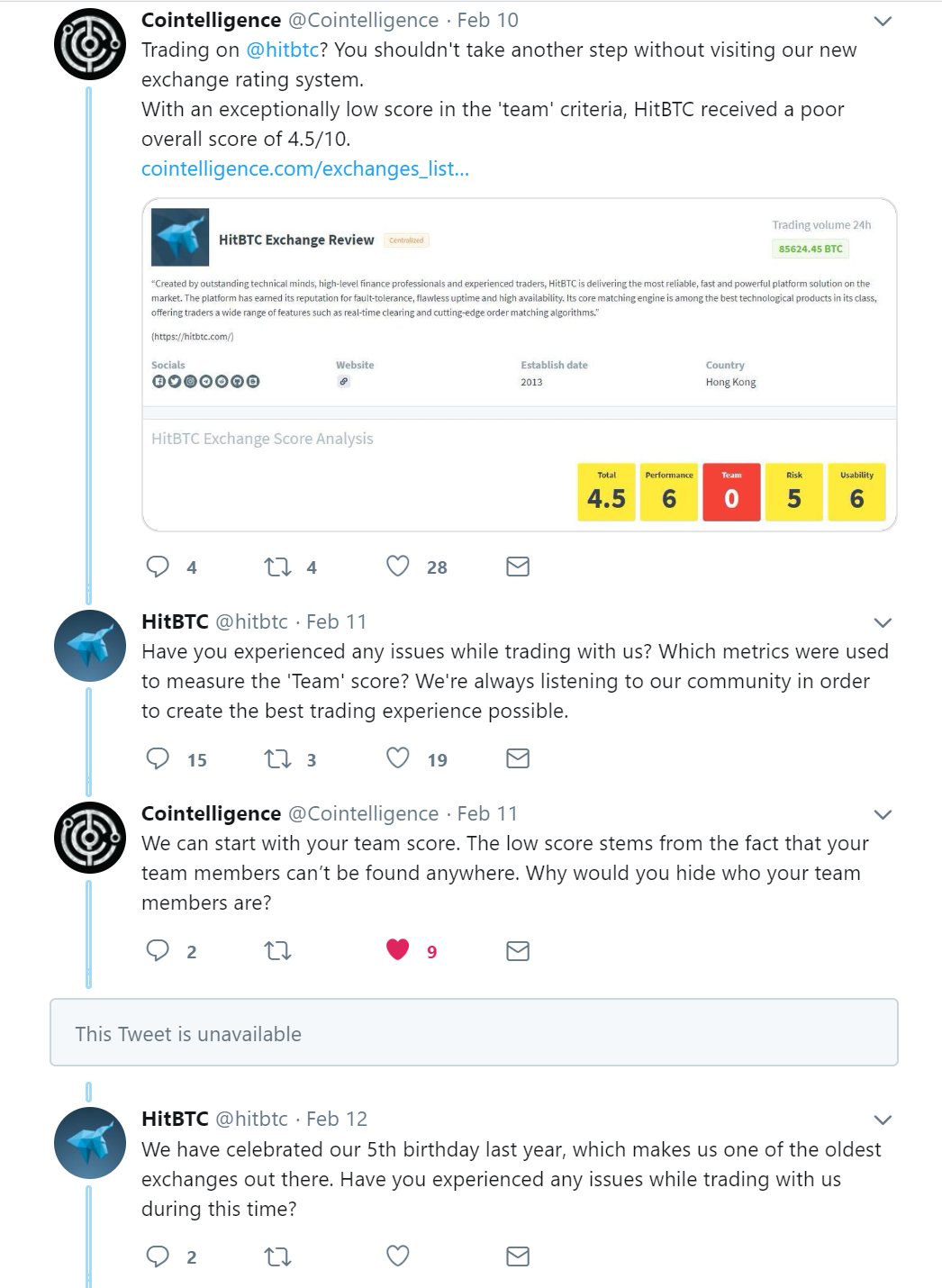 Any time we see an anonymous team, we consider it a red flag. We understand that for some exchanges, this is part of a culture of humility that stems from their local business practices, but one has to balance cultural norms against industry standards and customer demand. The crypto world has seen too many scams and failed projects with anonymous teams. Sharing information about who is working behind the scenes is a key step to establishing trust.

These four red flags should give anyone pause about HitBTC. The combination of the low reserves, the policies and fees which seem designed to make withdrawal of funds difficult or unappealing speaks of an exchange desperately trying to conceal its own insolvency.

Within a few seconds of querying their Platform Coinfirm generated an AML Risk Report for a major wallet allegedly tied to HitBTC which includes not just risk factors but also financial characteristics. Coinfirm has also published the industry first Know Your Exchange Report where they covered over 200 exchanges globally and provided them all risk assessments based on various parameters. In addition to the AML Risk Report below you can also see the assessment by Coinfirm in their KYE Report. You can find the full public version here, for the full version with risk assessments for each exchange please become an AMLT Network Member.

About Coinfirm
Coinfirm is a global leader in blockchain analytics and AML. Servicing anyone from major banks to blockchains themselves, the Coinfirm AML/CTF Platform uses proprietary algorithms and big data analysis to provide structured actionable data that increases efficiency, reduces costs and streamlines compliance to near automation. The blockchain agnostic platform is able to service any type of blockchain and currently has the largest market coverage with over 1100 cryptocurrencies, tokens and blockchains. 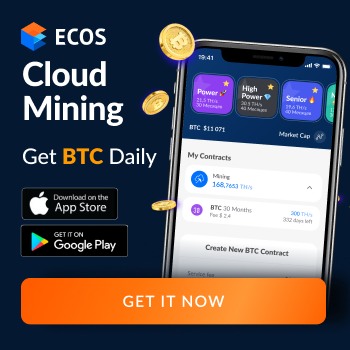