Home NewsInitiative Q is Going Viral. We Have Concerns. 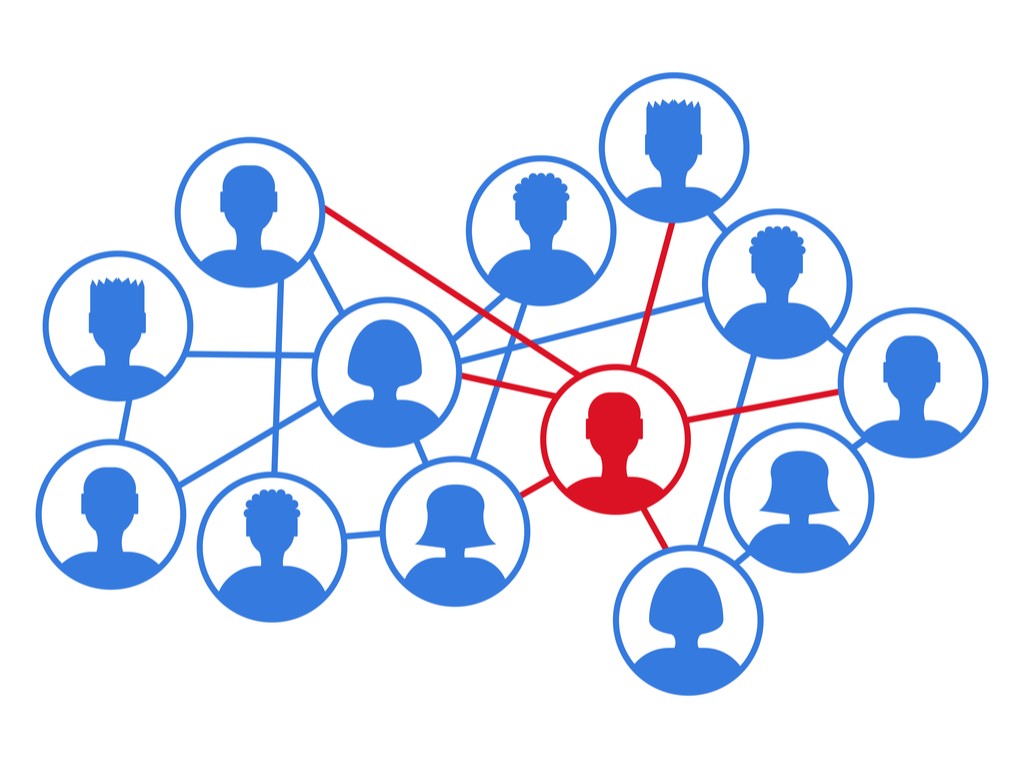 Initiative Q is Going Viral. We Have Concerns.

A lot of people have excitedly asked for their invitation to Q. But others think that this is just another get-rich-quick scheme with no substance. We liked Udi Wertheimer’s response so much that we got his permission to repost it here.

Almost everyone has seen some Initiative Q news come across their social media feeds recently. Saar Wilf’s Initiative Q says it will be “tomorrow’s payment network.” In order to encourage the mass adoption needed to succeed, Wilf has started a viral social media campaign that leads off with this:

Published by Saar Wilf on the 1st of August 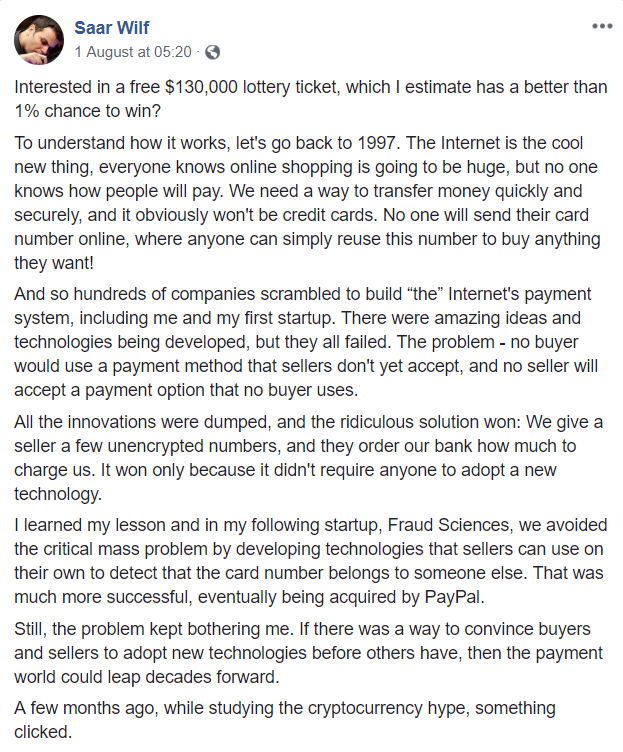 A lot of people have excitedly asked for their invitation to Q. But others think that this is just another get-rich-quick scheme with no substance. We liked Udi Wertheimer’s response to the Facebook post so much that we got his permission to repost it here. Read on:


"Let's put aside your preposterous, arrogant claims of your made-up "currency" being worth $2 TRILLION USD in the future, despite being nothing more than a nice landing page at this point. I guess anything goes in the world of marketing. I have some questions that are more specific to your actual model:

Except people are already doing this with Bitcoin. There are multiple solutions, both gateways to the traditional financial systems, and completely new payment systems (and many in-betweens) built as layers on top of Bitcoin in *excatly* the same way as you propose.

Your FAQ is berating cryptocurrencies for being a "brilliant solution to a problem that doesn’t exist", but you propose the exact same system. Anyone who spent a long enough time in this space realizes that if cryptocurrencies are to be used as a medium-of-exchange, we would have to use a layered approach. Each and every one of your points can be easily countered by anyone who has any idea how these things work:

* "Transferring security risk to the currency owners" - the important thing about Bitcoin is that economic actors, large and small, can *choose* to handle their own security. That's crucial for creating trust in the currency. But that doesn't mean you have to. Many people use second layers to let someone else manage security for them, and of course this trend will continue.

* "Unstable value": Your make-believe coin currently has a value of $0. If it's ever going to be worth $2 Trillion (LOL), well, guess what, there's going to be volatility on the way there. I find this argument particularly dishonest, considering your marketing material.

* "Legal controls": Have you ever used Bitcoin at all? Sounds like you didn't. While you can't enforce regulations on Bitcoin itself (just like you can't change the way gold behaves), you CAN enforce regulations on how people use Bitcoin. And governments do that, very successfully. Regulated exchanges and services exist all around the world, governments collect taxes, and everyone's happy. A layered approach would allow consumers to be oblivious to all of this, and have all regulation and compliance-related matters taken care of for them. This is already happening.


* "Reversability" - this one should be obvious for someone with your background. There's a lot of value in *Bitcoin the asset* being irreversible. Just like if I physically hand you an ounce of gold, I can't use some sorcery to magically make it re-appear in my hand. This property helps establish trust within large institutions. BUT IT DOESN'T HURT CONSUMERS IN ANY WAY. They can use any number of "second layer solutions" to provide them with reversability (as long as the merchant agrees). Reversability is provided in the exact same fashion as your solution would provide it.

* "Waste" - that's a very long discussion. Bitcoin isn't wasteful, it just helps find use for excess energy *which would otherwise go to waste*. It's gonna take a lot more than that to convince you, but I would suggest that if you're going to compete in this space you'll spend some time to explore this. This claim is very ignorant. So is the claim that bitcoin only supports 2 txs per second - it supports many many orders of magnitude more, using second-layer networks, just like the one you're proposing (except they actually exist and aren't just a paragraph on a landing page)."

Powerful words! We’ve reached out to Saar Wilf to see if he’d like to make an official response. We’ll keep you updated. In the meantime, what do you think? Have you requested an Initiaitve Q invite, or do you think this is a whole lot of smoke and no fire?

Thank you, Udi Wertheimer, for letting us share your thoughts with our readers.

Saar Wilf has provided us with a response to Udi's points.

Claim: 2 Trillion USD is a preposterous estimate for total value of the Q money supply.
Response: It is a very reasonable valuation for a currency that is used in a leading global payment network. This is according to the Equation of Exchange in monetary economics, and current transaction volumes of leading payment networks. Read more here: https://initiativeq.com/knowledge/economic-model
Of course, we are nowhere near becoming a leading network, and there are many risks and challenges ahead. You can definitely argue there is a low probability of success at this point in time, but that is unrelated to the currency valuation model.
Note: Currency value is very different from company valuation. The value of the Initiative Q company will be nowhere near those numbers even if it is very successful.

Claim: We are hiding the coin distribution.
It's in the FAQ from day one: 80% incentives, 10% payment company, 10% monetary reserves. Incentives for adoption are the highest priority, but it is also important to have enough for the payment company and monetary committee so they could use to fund development and create monetary reserves in other currencies.

Claim: As Q becomes popular its value will be unstable, exactly like cryptocurrencies.
This is also covered in the economic model. Stability is the main reason we went for a professional monetary policy (like governments) rather then a predetermined one (like bitcoin). Q will be released for trade gradually, controlling the supply so Qs maintain a stable purchasing power (around $1 per Q). The rate of release is managed by the independent monetary committee, matching economic growth.
By example: If 100,000 Q is worth $1000, one Q is still $1, but only 1% are tradeable (at that time).

Claim: Many of the challenges in cryptocurrency can be resolved by building a non-crypto layer on top of them.
Agree. The question is then why do currencies need to be on the blockchain at all? Just so no central power controls them? Assuming that is indeed the case (and there are serious doubts about that), there are much more efficient ways to reach this goal using governance and free market incentives. That is the approach we took.

Claim: Bitcoin isn't wasteful as it only uses excess energy.
I could not find support for this claim. Would love to read more about it.

And the main point: It's not enough to show that current problems with payment are technically solvable. That has been known for decades. The question is how to get people to be early adopters of these new technologies. Our proposal is to solve this problem by motivating adoption with future currency. Too soon to tell whether this is indeed the solution, but there are some promising indications.

What do you think? Do you agree with Udi's original comments? Have Saar's points swayed you to the side of Initiative Q? Or are you still undecided? One thing remains for sure, the crypto space is full of people who are passionate about what they believe. We look forward to fostering future discussions.

It remains to be seen whether we can call Initiative Q a scam, or just wishful thinking. It continues to be shared with the sort of "It's worth a shot!" attitude that caused people to forward "Bill Gates is Giving People $5,000" emails back in the late 90s and early 00s. When it comes to the possibility of free money, or getting in on the ground floor of what they hope will be the next PayPal, people have little concern about signing up and recruiting their friends. After all, unlike the multi-level marketing businesses that similarly clog your social media fee, Initiative Q isn't asking you to buy anything. They're just making unlikely promises about the value of the free coins they're handing out.

Our concern, and our reason for sharing this Initiative Q review, is that when "get rich quick" schemes like this go viral on social media, they tarnish the image of cryptocurrency. And when they're paired with untrue claims or distorted facts about existing cryptocurrencies like bitcoin, they can cause confusion among the general public. We are dedicated to truth and transparency in the crypto industry. Even if Initiative Q does work out as a new system of payment, we feel that their marketing has been misleading and their "by invite only" system for early adoption creates a false sense of exclusivity while at the same time encouraging people to spam their social media feeds with the Initiative Q spiel.

EDIT 7 November: Yesterday, Jackson Palmer Tweeted his own concerns about Initiative Q, which we think are worth considering: 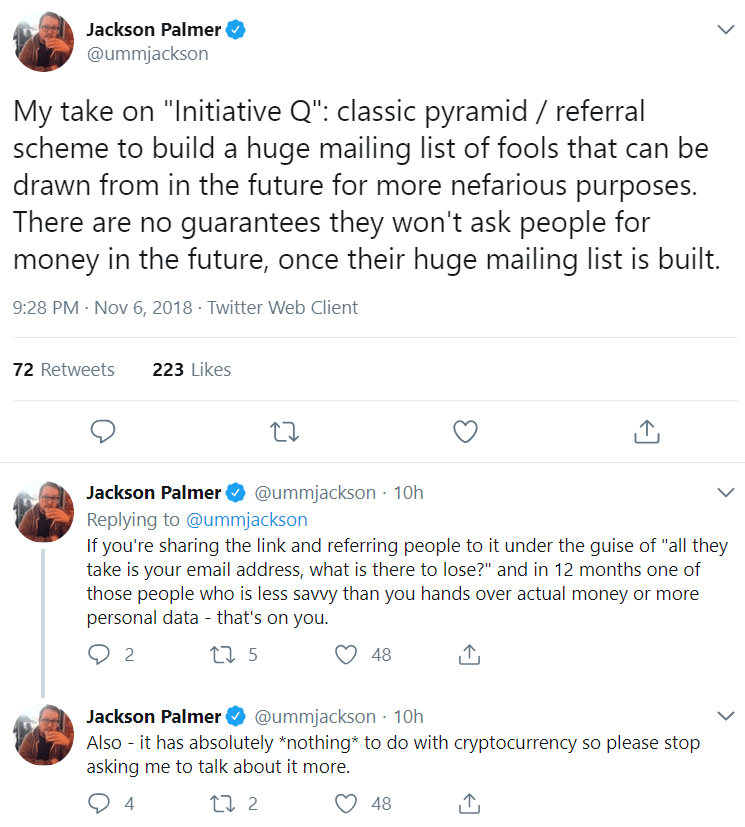 What is Initiative Q doing to do with your email? What will they ask for down the road? Maybe nothing, maybe monetary backing. Perhaps we shouldn't be so glib about handing out our contact details and inviting our friends to do the same.

EDIT 13 November: The general public refuses to listen to Initiative Q skeptics, and now even Forbes has given it coverage. Our CEO On Yavin reached out to the author, Lela London, to ask if she realized she was promoting a scam, and she did not respond, nor does she seem particularly concerned. As far as we can tell, despite claiming the title of being an award-winning journalist and blogger, she is not a tech journalist or cryptocurrency expert. Yet somehow, she thinks she has the ability to declare this the new bitcoin – while still saying it’s NOT a cryptocurrency. Since so many people seem to be calling it “the next bitcoin”, we can't help but suspect they’re being paid to write articles with this wording. 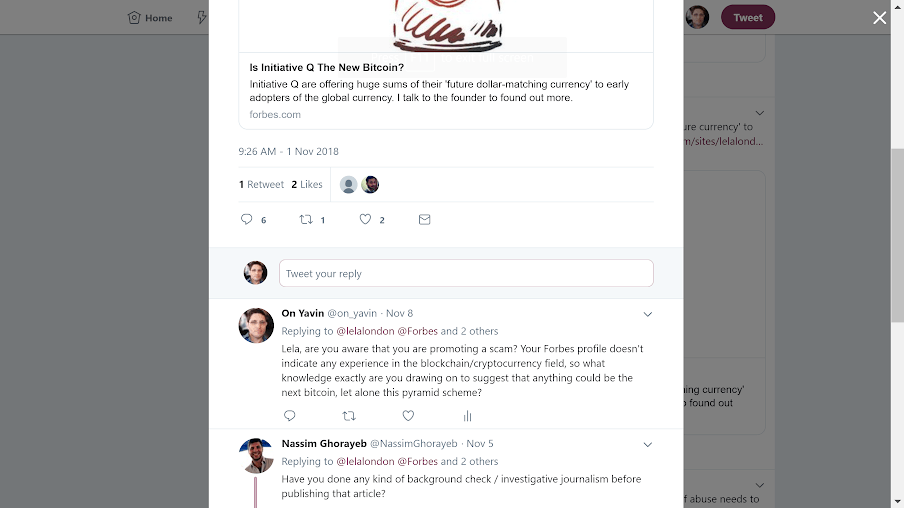 Lela London is clearly a culture journalist who appears to see this as just another trend to spot. While she has updated her article to include the voices of some dissenters, she still remains convinced that people have nothing to lose by giving Initiative Q their email address, even though Saar Wilf has said that he hopes the Q will be worth the same as USD... 10 years down the road. Are you really willing to endure an entire decade worth of spam and assurances, as well as who knows what else, while you wait for them to actually develop anything of value? We’re not.