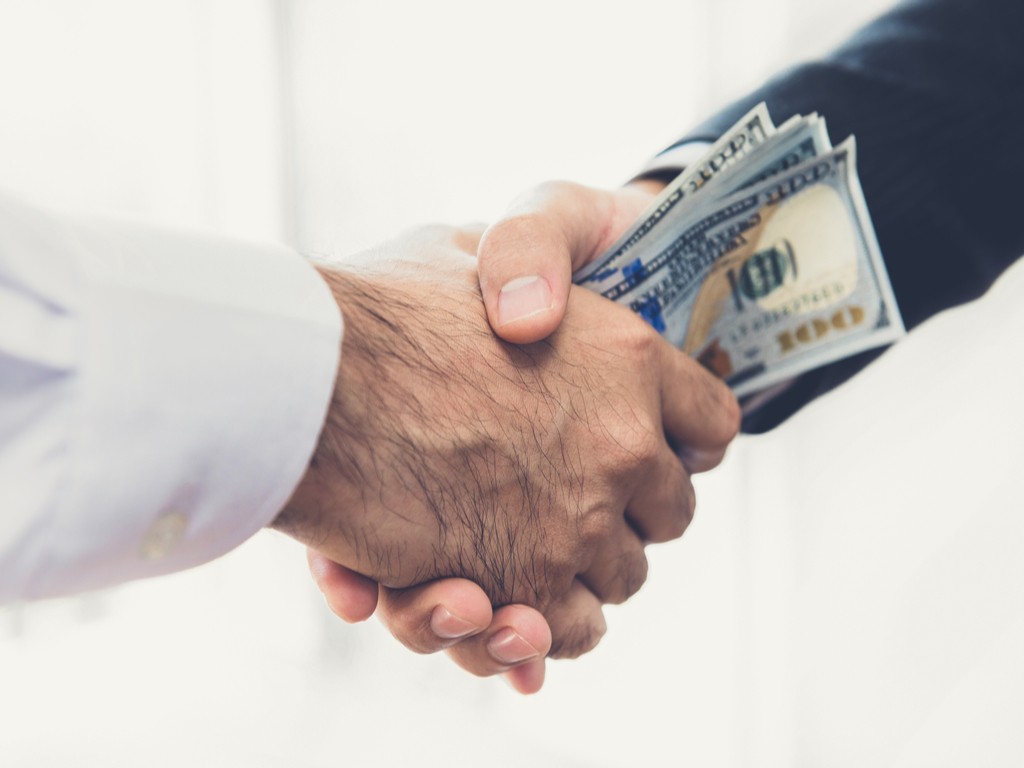 Corruption creeps into everything. While the blockchain revolution was started with grand ideas of decentralization and privacy, its growing popularity has led to unsavory elements looking for ways to corrupt it for their own means.

Corruption creeps into everything. While the blockchain revolution was started with grand ideas of decentralization and privacy, its growing popularity has led to unsavory elements looking for ways to corrupt it for their own means. The ICO industry is an especially popular target for bad behavior. Some people are just out for the money and the blockchain is a convenient tool for them; from fraudulent ICOs to advisors and rating agencies accepting payment to promote projects without doing basic due diligence. We try to fight this corruption by publishing our own fair and impartial ICO rating list, but it’s not enough to just do the righht thing. It’s also important to work to stop others from doing the wrong thing. We’re here today to shine a light on some of the worst offenders and call for more vigilance and better behavior going forward.

Let's dive into the rabbit hole...

My research team was analyzing Cremit’s ICO and found disturbing problems, as can be seen here. These issues are not even the worst part. When my head of research approached the advisors of Cremit, he received the following response to his questions: 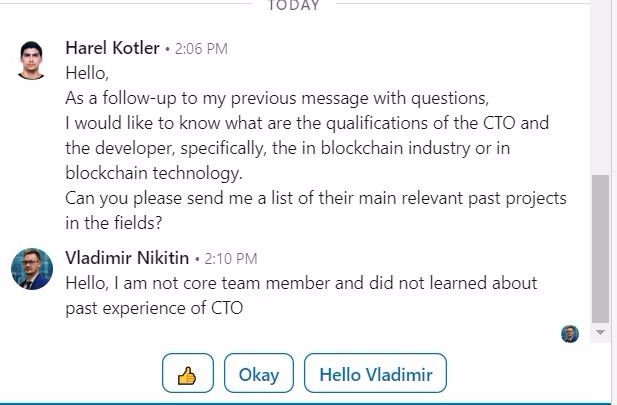 Mr. Vladimir Nikitin is considered to be one of ICOBench’s top experts! How can a crypto expert allow himself to join the advisory team of an ICO without doing proper due diligence on the team?

When my head of research approached another advisor, this was the response he received:

His team allowed him? He has been added as an advisor to ICO without even researching the ICO and the team himself? Tell me this is some kind of joke!

ICO advisors – you have a responsibility to the blockchain and the crypto community. You can’t keep joining ICO teams just because they pay you to do so! You should be joining teams because you believe that they have potential and you want to see them grow and succeed.

Still, the answers from these alleged top experts were better than what my head of research received when he tried to reach out to the rest of the team, including Cremit’s alleged CTO, marketer, developer, as well as a third ICOBench advisor. None of these individuals could be bothered to respond. As of publishing, we’ve received no response from any of them. You can see here how multiple attempts to contact their brand manager and one of their developers went unanswered. 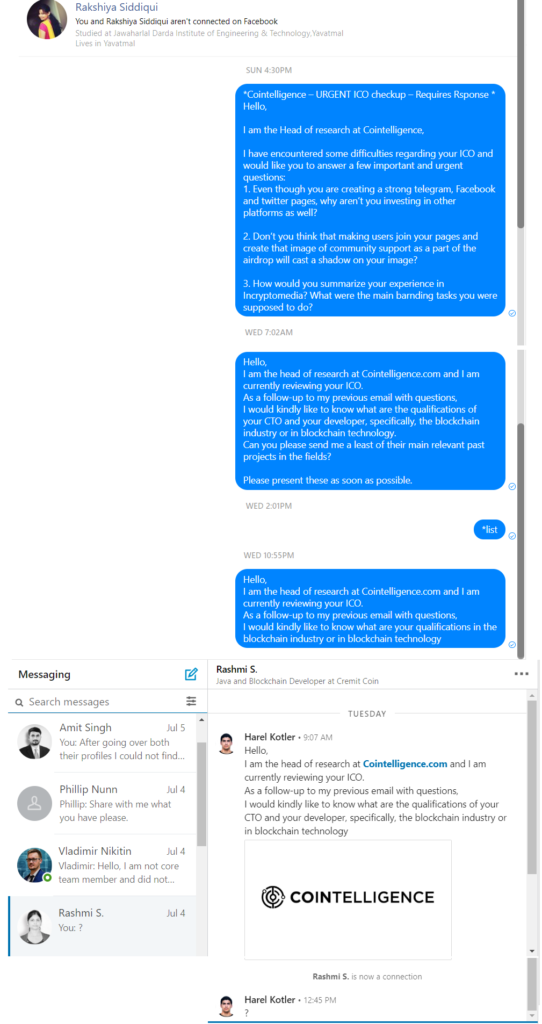 Another problem in the crypto community is the use of so-called “advisors” who are lending their fame to the project. Companies like VeganNation and Centra Tech recruit actors, athletes, and social media influencers to tout projects they barely understand, putting ICOs alongside multi-vitamins and waist shapers.

What are the ICO rating sites saying?

Now let's continue to the ICO rating websites out there. While my research team was analyzing the ICO mentioned at the beginning of this blog post, they discovered the following: 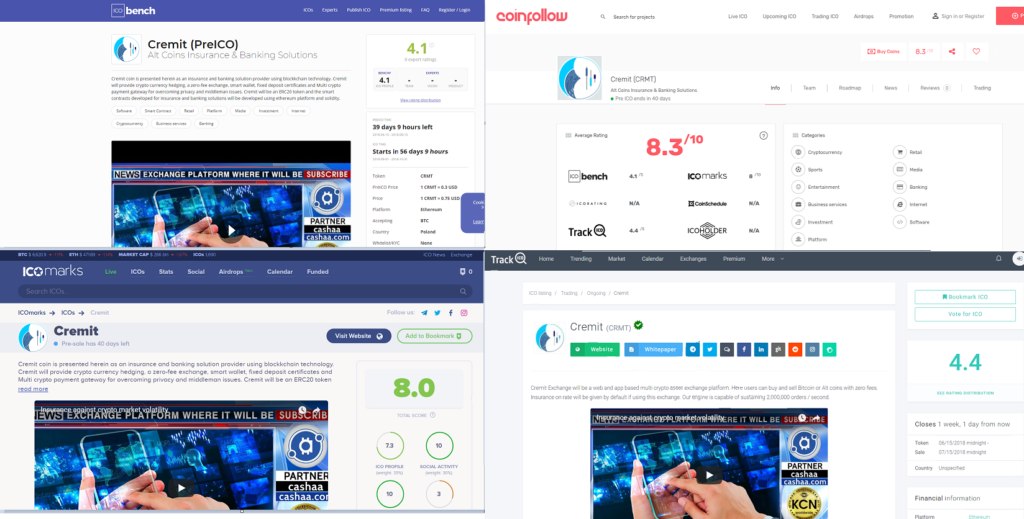 ICO rating websites - stop assigning higher ratings to the projects that pay you. Doing so greatly impacts our industry in a negative way. If you can't put in the effort to properly and professionally review ICOs before rating them, it's better that you go offline rather than hand out fraudulent ratings.

I wish I could say that falsely inflated ratings were the only problems my team found on ICOBench in the course of their research. They found failures to provide accurate information about ICOs and failures to catch obvious scams. Let’s look at a couple examples. 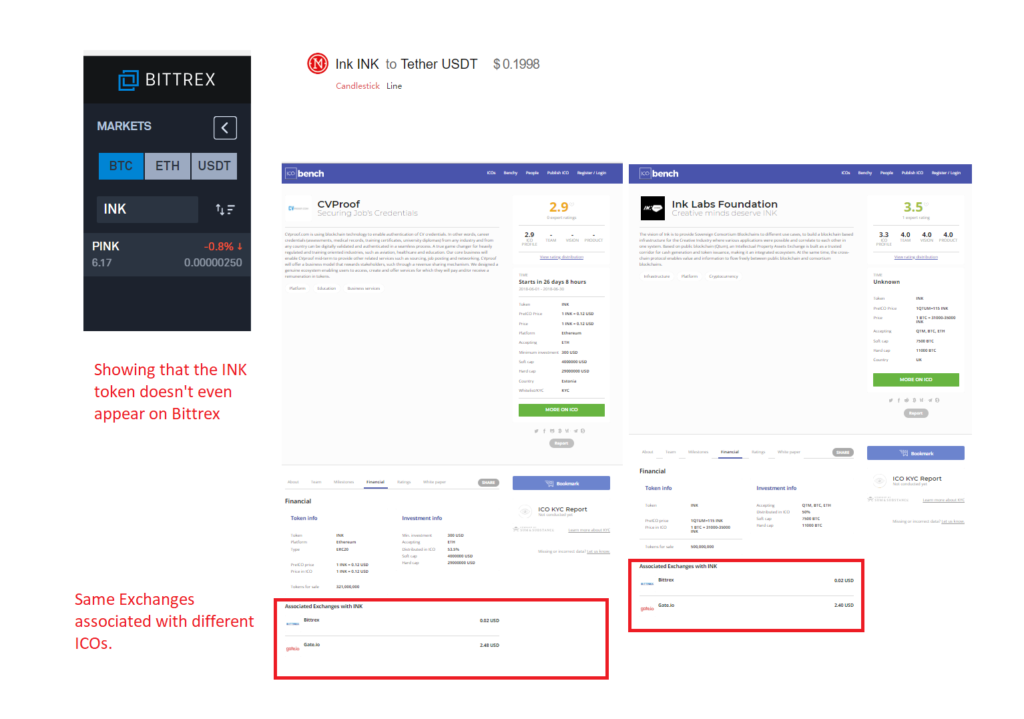 For Ink Labs Foundation, ICOBench listed the wrong exchanges. As seen in the images above, CVProof’s coin is available on these two exchanges. Our research and discussions with members of the community suggest that this is an issue with ICOBench’s methods of collecting exchange data.

In order to save time, ICOBench uses a bot to crawl the various exchanges to see which ones are offering a coin with the ICO’s symbol. The problem arises when the ICO has chosen a symbol that matches one that is already in existence. An easy example of this is the ICO BitChord. They chose BCD as the symbol for their token; however, BCD is already in use for Bitcoin Diamond, which would lead a bot to believe that any token offering Bitcoin Diamond is actually offering BitChord.

While this is a good reminder for ICOs to make sure that they’re choosing a unique identifier for their token, it also highlights the importance of not over-relying on automation. It’s one thing to have a bot crawl the exchanges to save you the time of manually checking them yourself, but there should still be some human oversight. Before this information is added to an ICO listing, it should be checked and confirmed to avoid such mistakes. I would suggest taking an extra step in cases like BitChord/Bitcoin Diamond, such as making notes of tokens with identical or similar symbols; in this way, we will be able to avoid investor confusion.

More concerning than this issue, however, is the instance of Veio, where ICOBench failed to spot an obvious scam.

Some scams are difficult to see coming. Some broadside experts who should know better. Some, like Veio, think they can fleece investors by creating a team populated entirely by stock photos.

It’s ridiculously easy to investigate this; just do a Google image search and you can trace an ICO team member’s photo back to its source. This isn’t the only example of scams making use of stock photos or other people’s social media profile pictures to create a team out of thin air. We’re not sure how much longer ICOs will try to use this easy-to-spot method, but in the meantime, there’s no excuse for rating sites not to do this quick and easy research into the identities of the projects they’re rating.

While ICOBench did eventually catch on to the fact that Veio was a scam, for a time this ICO was listed on their site with a 3.5 rating.

ICO ratings should never be done for payment. ICO rating websites need take extreme measurements to avoid corruption. Don’t get me wrong – I am not against profiting financially, but there are red lines that should never be crossed. Paying for advertisement, including premium listings, is fine and is a common practice. To build brand awareness and exposure you need to pay for your marketing efforts. However, paying for ratings is completely different and doing so is misleading ICO investors, especially the inexperienced ones. The crypto industry has enough problems with world governments and banks, we don’t need to add to these issues by perpetuating the reputation that the industry is filled with scams and fraud. We need to do everything we can to protect ICO investors so that the industry will continue to grow and continue to change our lives for the better.

The community has had enough!

I’m not the only whistleblower! A quick tour of the crypto experts on LinkedIn will turn up many others directly calling out ICOBench, fraudulent raters, and the pay-to-play mentality rearing its ugly head in the crypto community. 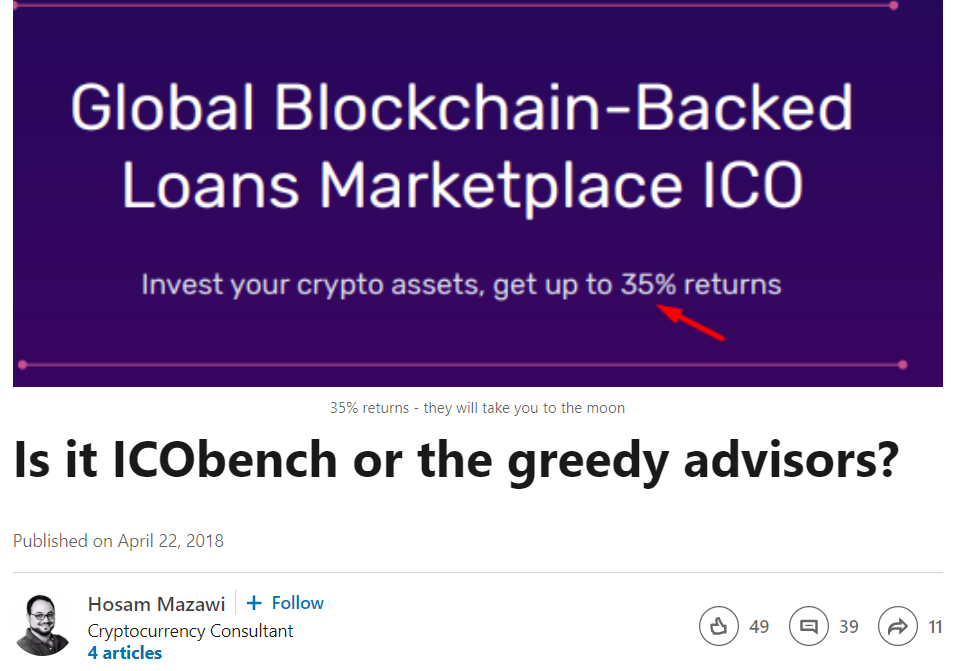 Hosam Mazawi called this issue out back in April, pointing out a couple of blatant examples of ICOBench advisors giving a scam a good rating, only to hastily revise their ratings when other, more vigilant sites spotted the truth.

I enjoyed Hosam’s article so much that I reached out to him for his opinion about Cremit. He provided this insightful quote:

Let's assume that ethereum is 10/10, now compare every other single ICO to ethereum as benchmark, what rating would you give Cremit ICO with their "top star" ICO bench advisors? 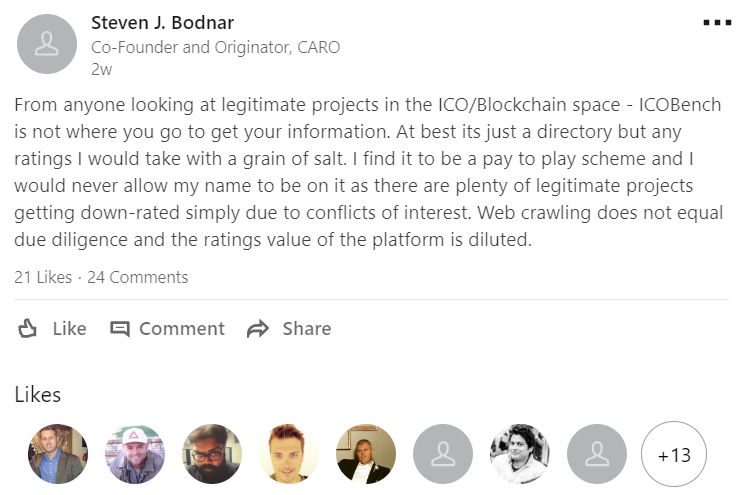 Steven J. Bodnar spells it out clearly. “Web crawling does not equal due diligence.” It takes actual research to provide ratings of any value, and this combination of slap-dash effort and bribery is pulling the entire industry down into the mud. 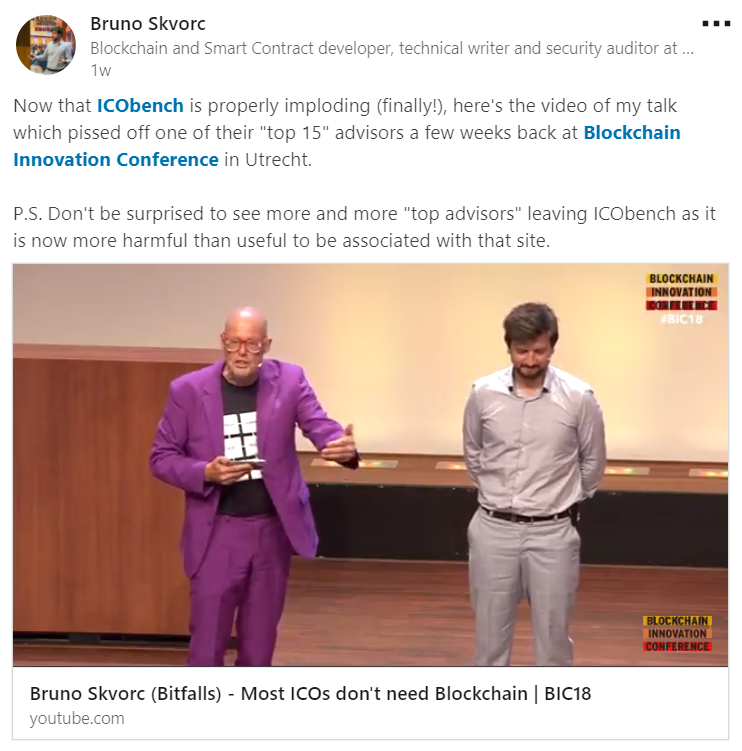 Bruno Skvorc seems to believe that the writing is on the wall for ICOBench. He doesn’t think that they are going to be able to recover from this damage to their reputation, either. 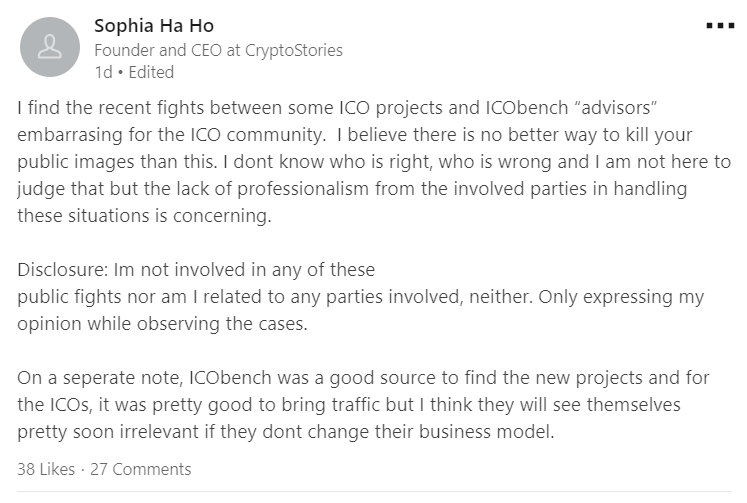 Other people seem optimistic. Sophia Ha Ho is refusing to take sides, and rightly pointing out that this is an embarrassing situation for all of us to be in. She’s holding out hope for ICOBench to turn things around, which may make her a minority in the crypto community.

In the meantime, those who still believe in the value of ICOBench’s ratings may find themselves ridiculed on social media, as happened to Zhazira Lepess, founder and CEO of ZAZA. 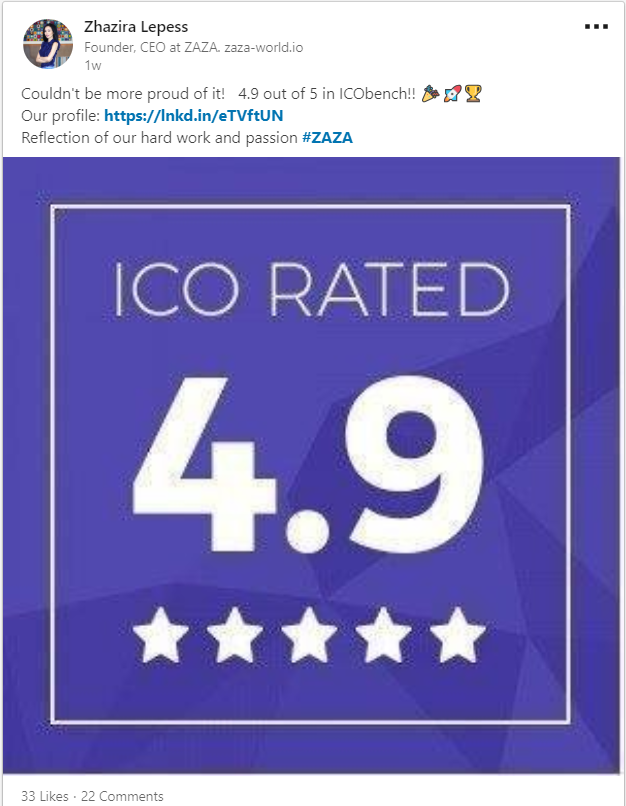 Getting a 4.9 out of 5 rating on a legitimate site would be something worth crowing about, but if you’re proud of your rating on ICOBench, people will be happy to drag you back down to reality. I especially like this pointed comment from Robert Herman:

A “pointless rating meaning nothing". How much longer until it goes beyond meaning nothing? At this rate, anyone sharing their ICOBench rating may risk facing suspicion that they paid to get it.

It's also been a subject of some discussion on crypto subreddits, as seen on this post from user Take50 on /icocrypto:

This is a case where you really want to read the comments. Other Redditors are sharing their experiences, research, and opinions about shady ICOBench experts and ICO advisors.

The fact that you can pay for a better ICOBench rating is an open secret, to the point where it’s no longer shocking when you hear about it. Well, Markus Hartmann, co-founder of Alethena, might have some insight to share about that. You see, like me, Markus is concerned about the current state of ICO lists and ICO rating, so he decided to see what would happen if he tried to improve the ranking of his own ICO.

There’s a lot of great stuff in Markus’s article, but this really brings it full-circle. 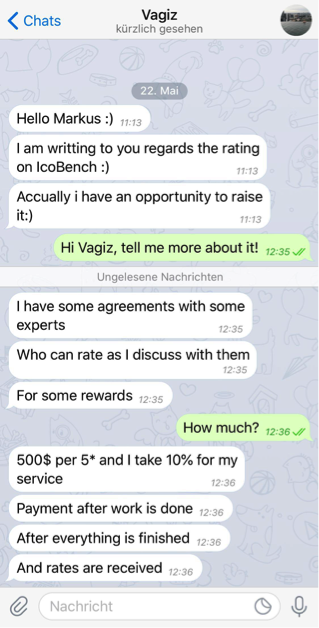 Addendum, September 10th. We recently saw this post from Benjamin Hall on LinkedIn:

Not sure what you're reading there? Think your eyes are deceiving you? Don't worry, Hall elaborated:

It sure looks like Nikitin is admitting that the ICO he's serving as an advisor on, that he's asking Hall to improve the rating on, is "garbage." Not the worst garbage, sure, but there's not many ICOs worse than it? So why is he serving as an advisor? Why is he asking his fellow ICOBench expert to change his rating?

Oh yes, we should also mention that since we originally published this article, Nikitin has joined ICOBench's team as "Chief of Bench." You'd think a lofty title like that would come with more concern with his image, but no. What does image and title manner, as long as you can still have "garbage" ICOs hire you as an advisor?

This needs to stop.

This behavior we have seen with ICOBench, Cremit, and others cannot continue. My team, and those who share our convictions, will continue to fight scammers. We will fight the ICO teams who believe they can fool investors and get away with it. We will call out the corrupt ICO advisors who join projects without conducting their due diligence.

We advise all crypto experts and ICO advisors to stop thinking about making a quick buck, and instead consider their own integrity and the future of the crypto community. The blockchain can accomplish great things, but not if it’s being held back by greed and dishonesty.