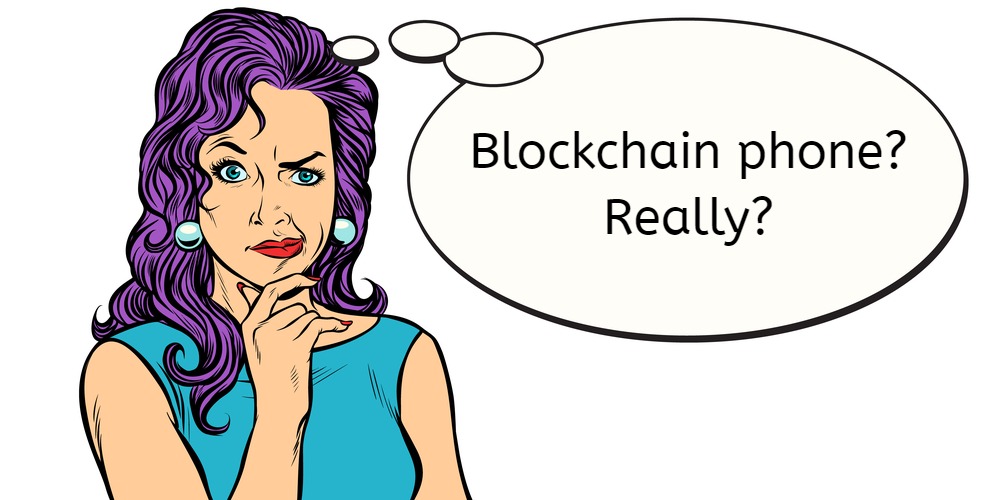 Do you hear the masses clamoring for a cold-storage wallet built into their phones? The average person outside of the crypto community doesn’t even know what cold storage is! For that matter, when was the last time you heard anyone say “You know what? I feel like spending $1000 on a phone from a company I’ve never heard of, based on technology I’m not familiar with, and with scant details on the features I actually care about.”

Last week, Sirin Labs released a video announcing the features of their promised Finney phone (named after Hal Finney, the second person to ever use bitcoin). In response to this news, the value of the SRN token temporarily spiked, as this token will be needed to buy apps for the phone, and the phone itself. The phone has a suggested retail value of $999, which can only be paid via SRN coins from your Ethereum wallet.

Who is Sirin Labs anyway?

A quick Sirin Labs review. This company previously made waves by releasing what was supposed to be the most secure smartphone ever, carrying with it a $16,000 price tag (to put that into perspective, you could buy a decent subcompact car for that much money). It’s estimated that about 750 of these luxury phones were sold, before Sirin Labs unceremoniously pushed them off of the Sirin website in order to focus on the Finney.

So Sirin does have experience with producing smartphones, albeit a limited quantity of a phone that was out of reach for the average consumer.

The question is, do they have a genuine interest in cryptocurrency and the blockchain, or do they see it as another gimmick to be chased, and an easy way to bring in $150m via an ICO?

Let’s look at the Finney phone

Well, let’s not actually look at the Finney phone, because even though the website claims that the phones are going to ship in November (you know, this month we’re currently living in), you can’t seem to find anything more than rendered images. Call me crazy, but if I was trying to launch a $999 phone and compete with the current industry giants, and my phone was launching this month, I’d be putting that thing into the hands of as many tech journalists and social media influencers as possible.

The main selling points of the Finney phone are blockchain-enabled security, a dApp store, and of course, a built-in cold storage wallet. These are the features intended to set it apart from the average iPhone or Android device.

There’s only one model of Finney phone currently available for pre-order, and it boasts the following stats:

Compare this to the Google Pixel 3

And the iPhone X:

While these stats seem relatively comparable, it’s worth noting that those specs are the only information that Sirin Labs provides about the Finney phone's tech specs, whereas Android and Apple offer a lot more information about the features that phone buyers are concerned about, such as wireless charging, operating system, and whether the phone comes with earbuds.

So Sirin Labs isn’t providing us a lot of details about what to expect from this phone in terms of, well, phone features. So let’s consider what makes this phone unique.

Do you really want your phone to serve as a cold storage wallet?

Perhaps the biggest selling point of the Finney is its built-in cold storage wallet. At first glance it seems pretty cool how this panel slides up from the back of the phone, so secretive and high-tech.

But on the other hand, consider all of the things that could go wrong here.

-We all know at least one person who has ruined their phone by dropping it, soaking it, or otherwise subjecting it to significant damage.

-You take your phone everywhere with you, and could potentially leave it somewhere.

-Your cellphone could be stolen.

All of these could result in the temporary or permanent loss of any crypto assets you’re storing in your Finney phone. The whole point of a cold storage wallet is that it keeps your crypto assets safe and secure. Taking that with you everywhere you go makes about as much sense as cashing out your savings account and carrying a wallet full of $1000 bills with you. There’s a reason why we have savings accounts and investments instead of carrying our wealth on us.

Hopefully, Sirin Labs is using backup seed code, similar to what existing Trezor and Ledger hardware wallets offer, but I could find no details about backups on their website.

Are these phones even real?

Let’s revisit the idea of the release date. Again, according to Sirin Labs’ website and several news articles, Finney is supposed to start shipping this month and be available in the first nine flagship stores by the end of the year.

And yet, when you visit the pre-order page, it shows an image of the phone and says “Design Subject to Change”, suggesting that the actual phone hasn’t been finalized yet, that perhaps there are no actual phones. Although a member of the Cointelligence team did see a prototype of the phone in Zug six months ago, the average consumer would be hard-pressed to find any proof of the phone’s existence on the internet, just a lot of hype.

As for the stores, 8 of the 9 locations simply say “Coming Soon.” The London, UK store has an actual address but claims it is “Under Reconstruction”, whatever that means.

One has to question what Sirin Labs would even put in these stores, considering the fact that they only have one single product in the Finney line. Although a personal computer is promised in the future, currently there is just the supposed Finney phone, available in one model, and one color. That’s right, you can’t even choose between Black, White, and Rose Gold (for the millennials). I can only imagine a sad store with displays featuring the same phone, over and over again. Maybe some cases and earbuds?

The specter of mass adoption

The buzzword for any crypto or blockchain product these days is “mass adoption.” We want to bring crypto to the masses. We want to make it easy for everyone. Even your mom will understand the blockchain after she tries our product!

Finney is no stranger to this fad. They claim their phone will “bridge the gap between mass adoptions of blockchain technology.” How? Do you hear the masses clamoring for a cold-storage wallet built into their phones? The average person outside of the crypto community doesn’t even know what cold storage is! For that matter, when was the last time you heard anyone say “You know what? I feel like spending $1000 on a phone from a company I’ve never heard of, based on technology I’m not familiar with, and with scant details on the features I actually care about.”

These phones run on SIRINOS, which is purported to be an ultra-secure, Google certified modification of Android. Will this ultra-secure operating system be compatible with existing Google Play store apps? Because I guarantee you, the general public doesn’t care about dApps that they have to pay for with cryptocurrency, they care about whether they can check Facebook, play Candy Crush, and Facetime with their grandchildren.

Everyone wants to make a blockchain phone

Finney wants to lay claim to the title “first blockchain phone”, but they’re not the only ones in the running. HTC’s Exodus 1 phone is supposed to start shipping next month, and I’m willing to bet that whether or not this phone is any good, the general public is a lot more likely to consider buying a blockchain phone made by a company they’ve actually heard of.

In the meantime, Horizon Communications propose to create a blockchain-based LTE mobile network.

Our phones are part of our everyday life, and crypto enthusiasts want cryptocurrency and the blockchain to be a part of that daily life, too. To some, it might seem like a natural choice to combine the two, but so far we see no evidence that “blockchain phone” is anything more than a buzzword. It’s like a WiFi enabled water bottle. Sure, it’s important to stay hydrated, but do you really need an overpriced water bottle to sync to your phone and tell you when to drink, when you could just set an alarm that says “Hey, drink a glass of water.”?

A blockchain phone is just a marketing gimmick. If the Finney phone even comes to the market, it’s just going to be another cell phone with a modified Android OS and a built-in wallet. That’s not a blockchain phone. It’s an over-priced attempt to combine two forms of technology that have no need to be put together.