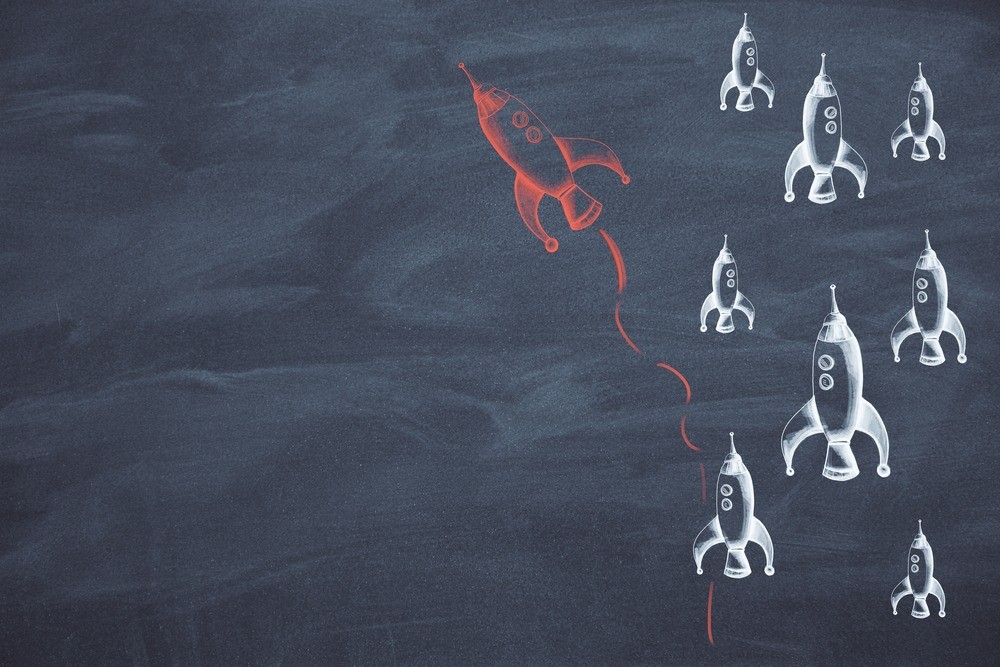 We’re not like the strict professor at university who likes giving low grades, we just believe in fairness and it would be wrong to deceive the investors by giving false ratings to ICO projects.

An Initial Coin Offering (ICO) is the modern way of raising funds for projects. Some might confuse it with an Initial Public Offering (IPO), but the former utilizes blockchain technology for its implementation and gives investors crypto coins or tokens rather than shares in the business. The ICO market is huge and has expanded significantly over the last two years, and more than 600 ICOs were conducted in the first six months of 2018 alone.

ICO and STO crypto rating websites play an important role in the market, they are a gateway for new investors. These sites provide them a path to find out about new attractive ICOs, into which they can invest. However, many rating websites are posting deceiving ratings, where the actual project is not as good as its rating would suggest. The false rating can be given due to weak research, but mainly, the rating websites are charging extra to give the ICOs a good rating.

At Cointelligence, we do things a bit differently. We don’t blindly rate projects, and we don’t accept money to adjust our ratings. Instead we take time in researching every aspect of the project, before its rating is published on our rating page. This leads to a big discrepancy between how we rate certain ICO projects, and how other sites rate them.

The following are few projects that we rated low but have been rated high by other rating websites.

We’re not like the strict professor at university who likes giving low grades, we just believe in fairness and it would be wrong to deceive the investors by giving false ratings to ICO projects. The Food Nation ICO has no public team, no project outline, no competitor analysis, and a very low quality of marketing and social engagement. We found this information through research and despite this public information, other rating websites gave them a high rating. 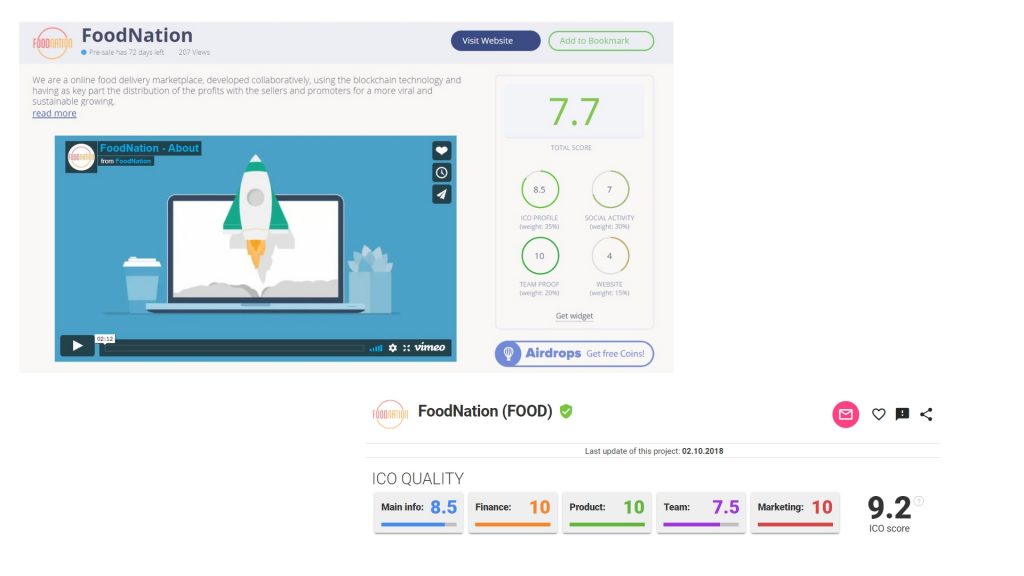 When we returned to ICOBench to get a screenshot of their rating for FoodNation, we discovered it had been removed from their site. However, a tour of other sites shows references to various ratings for the project. From our initial discovery of a 4.5 rating, it apparently dropped to 3.5 and then 3.1 before being removed. At least some of ICOBench’s experts must have noticed the same issues we did! 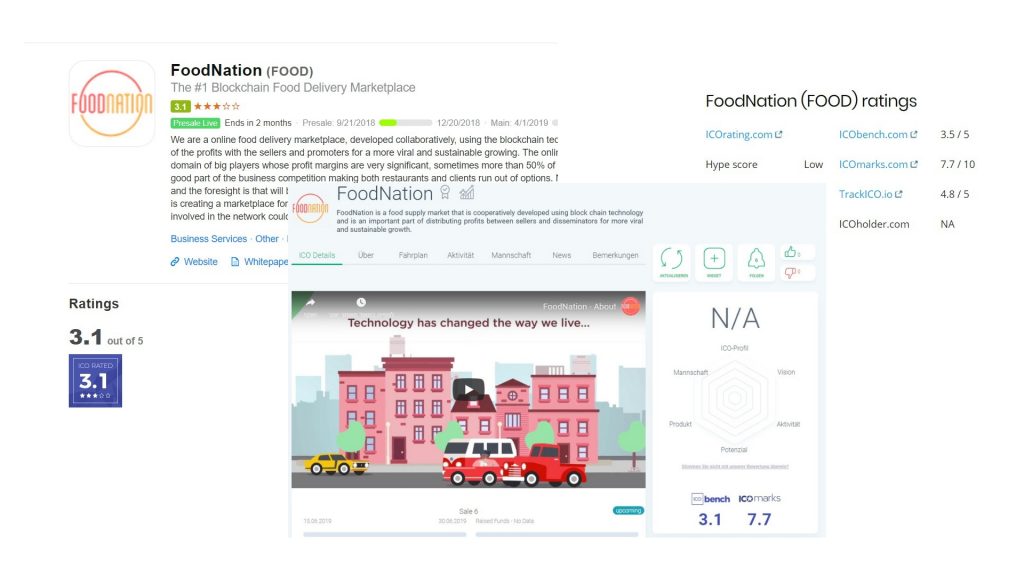 This shows how ICO rating websites are deceiving the investors and putting the whole market at risk.

When we investigated Arround, we discovered they have an inexperienced CEO and CTO, whose previous experience cannot be verified and only one developer out of the whole team appears to have any experience. None of this seemed to phase the raters on other sites. 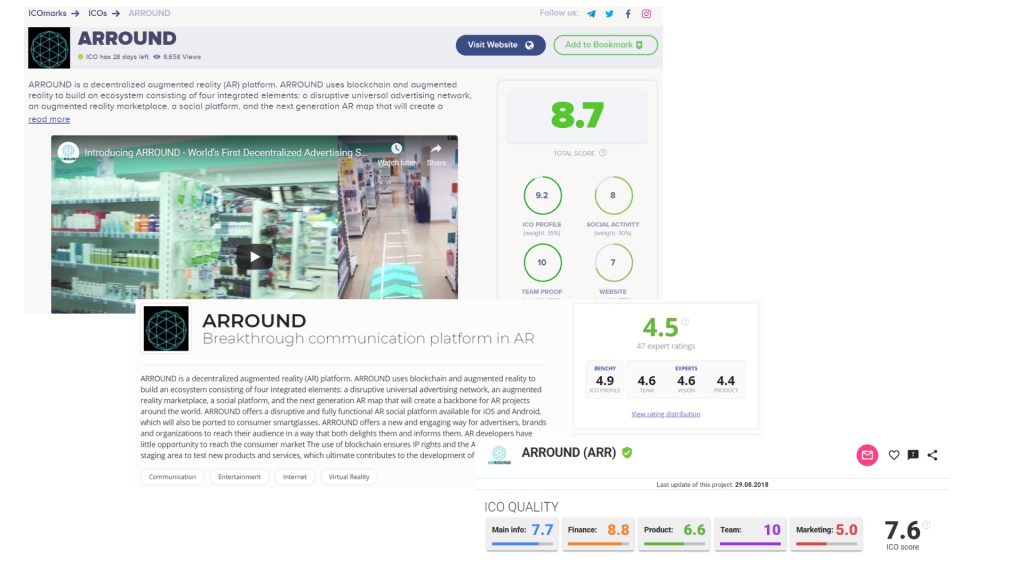 Meanwhile, Black Insurance’s founder has not even listed the project on his LinkedIn and most of the team is inexperienced. Apparently not all raters consider these red flags? 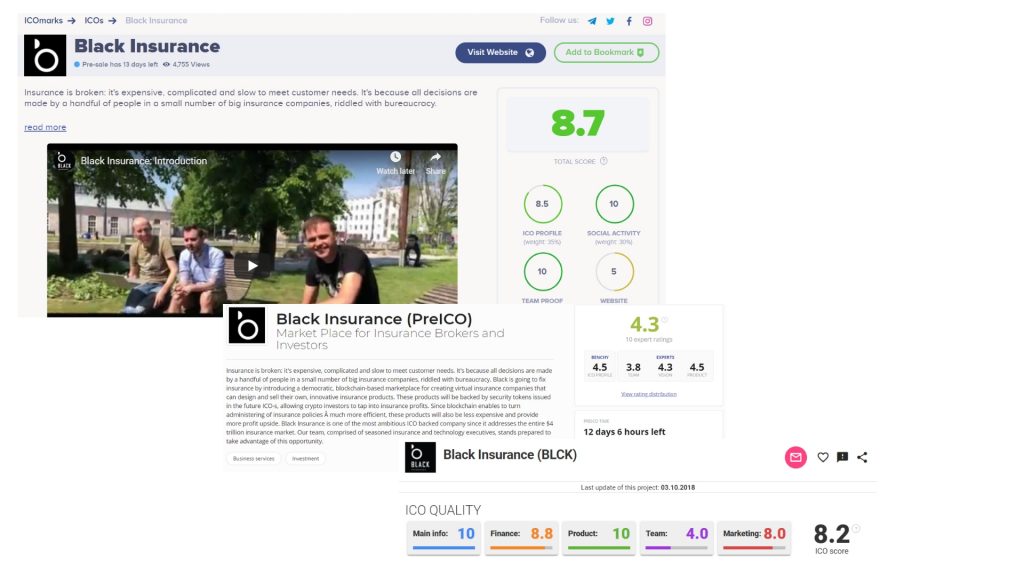 Similar issues were found in Bitcademy Football, and yet all three of these other rating sites gave them good scores.

Some of these rating websites have been known to charge ICOs more to rate their projects higher than they deserve. It’s not unusual to find ratings accompanied by false reviews, which state generic comments like “good project”, “good market for the project” and such.

When we rate a project, we look into it from every possible perspective and put time into studying its team and roadmap, before publishing the rating. We believe that this will create confidence in the ICO market and bring in new investors. Trust is very important in this market, as many don’t take it seriously and some call it a sham.

With so many ICOs being created every day, it can feel like your project is getting lost in the shuffle, even if it has decent ratings and reviews. For this reason, many ICO listing and rating websites offer a featured rating system. This puts a project at the top of the list, making it one of the first things potential advisors see when they visit the site.

Unfortunately, people on both sides of the equation (that is to say, project owners and ICO raters) seem to think that a featured project should automatically also get a better rating. This leads to reviewers artificially inflating the rating of a project in order to please their paying customers.

Because some sites do this, ICOs expect all rating sites to be willing to improve their rating as part of a featured listing. We experienced this with a project that we gave a 5.6 rating. Our raters had concerns about the CEO and CTO’s experience, and the lack of a development team was seen as a potential red flag. When the project approached us about a featured listing, this was what they said:

When we informed them that we stood by our rating and would not be increasing it, they sent this follow-up:

We applaud this project for addressing some of the issues that our reviewers initially brought up. One of the reasons why we provide such detailed reviews is so that the ICOs being rated, and those that wish to follow in their footsteps, can see where there is room for improvement. But telling us that you’ve improved some things and paying for a featured listing are not enough to compel us to change our rating!

Other ICOs respond more vehemently to our process. Another project submitted their ICO to our list and indicated they would be interested in a featured listing. We found that their application was missing some of the information that we include in our listings and asked for them to provide this information before moving forward. This is a pretty routine part of the process, so we were surprised when our repeated requests were met with this response:

A GDPR notice is a pretty strong response to a simple request for the basic information included in any ICO listing!

Still other ICOs believe that paying for a promoted listing means that they are also entitled to receive a rating, as seen in this email where they helpfully included a screenshot demonstrating their lack of rating as compared to other (non-promoted) projects.

Our response was simple:

It is important to us to continue to rating a random selection of ICOs, not just those that pay to be on our site. Ultimately, the project in question decided to discontinue their promoted listing after discovering it didn't include a rating, but our decisions are based on our company policy, not on what would make us the most money.

Let me tell you, Cointelligence will not be bribed or bullied. Whether it’s providing honest ICO ratings, calling out advisor corruption, or shining a light on the racist underbelly of the community, we stand by the truth. We will not remove or change our ratings. We will not back down from what we stand for.

In an ideal world, the issues that we have raised above would not exist. Unfortunately, the world is full of people who are greedy, or people who don’t want to put the work in to do a job right. But, if strict due diligence is carried out and rating websites take care in publishing only realistic ratings then featured ICO ratings can be very beneficial.

By rating an ICO, you provide investors with the means of determining whether a given project is worth being invested in. This will create a transparent market, where all the projects are vetted and strive to improve themselves, to increase their rating. Consequently, such a market would make it easier for investors to filter through projects that might be scams or projects that might not have that much potential.

Cointelligence strives to provide such a transparent platform, where the whole process of ICO rating is kept transparent so that no one can blame us for having any sort of bias. We are constantly working to improve the level of transparency in the ICO market and provide the investor with a list of genuine, hard working projects, in which they can invest. We believe that, in the long run, this will create a culture of honesty and integrity in the cryptocurrency community.